In November 2018, Rayne village took part in the Commemoration of World War 1. Douglas Chapman lived at Rayne Station and was one of the fallen. 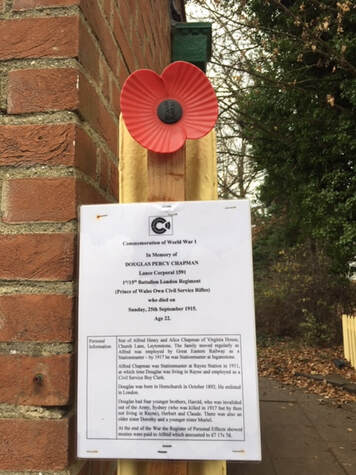 Douglas was born in Hornchurch in October 1892. He enlisted in London.

​
Douglas was the son of Alfred Henry and Alice Chapman of Virginia House, Church Lane, Leytonstone. The family moved regularly as Alfred was employed by Great Eastern Railway as a Stationmaster. Alfred Chapman was Stationmaster at Rayne Station in 1911, at which time Douglas was living in Rayne and employed as a Civil Service Boy Clerk.

Douglas had four younger brothers, Harold, who was invalided out of the Army, Sydney (who was killed in 1917 but by then not living in Rayne), Herbert and Claude. There was also an older sister Dorothy and a younger sister Muriel.

At the end of the War the Register of Personal Effects showed monies were paid to Alfred which amounted to £7 17s 7d.

Douglas was killed in the most serious loss of life the Battalion had suffered up to that point. The Battalion was acting as Battalion Reserve to an attack by 6th and 7th London on the German lines near the Double Crassier at Loos.The 8th London (Post Office Rifles) were the support Battalion.  Gas had been used by the British for the first time to soften up the opposition. It had had very little apparent effect and the attack ran into fresh defences together with heavy machine gun and artillery fire.
​
The 8th London were committed to the fighting to reinforce 7th London. They soon got into trouble themselves so two platoons of the 15th London's "B" Coy were sent forward to help carrying bombs.They had to cross around 300 yards of ground carrying about 60lbs of equipment wearing their smoke helmets which reduced their ability to see what was going on.
Of the 26 men sent only four returned unhurt. Twelve were killed ourtright and the rest were missing or wounded.
​
Extract from the Battalion War Diary records:
25th Sept.  The Battalion was in Brigade reserve & moved up to our now old front line as soon as the 6th & 7th Batt had carried out their successful attack.
We supplied a party of 25 men to carry over bombs, they had a bad time crossing & only 4 were neither killed nor wounded: immediately they left our front trench they came under a heavy fire from the right.
A most striking event of the attack was the absolute silence of the German guns as out first 4 lines went over. There was also not enough wire cut the Germans had machine guns concentrated on all places where it was cut & our men lost heavily at these points.
The gas seemed to do no actual damage & not a single dead German killed by gas was found opposite us – though without doubt it frightened many – the prisoners who were brought in certainly did not appear to be in any way affected & except for a very few oxygen respirators the only thing they had was a wad of cotton wool."

This information was copied from Rayne's War Memorial which records all those from Rayne who died in battle.